The Farmhand and the Faerie Gold

'That is a wonderful thing, that old castle there, he would say, pointing to the Ynys Geinon Rock. I remember a time when people would be terrified to go near it, especially at night. There was considerable danger that one might be taken by the Bendith eu Mamau.' (The faeries). 'It is said that there are a great many of them there, though I know not where they abide. 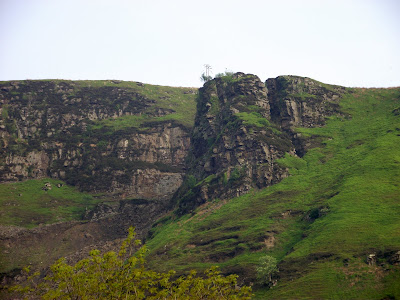 The above quote is from a gentleman who was interviewed about the fae over 100 years ago. It's at Ynys Geinon that our story is set.
One day a young farmhand, called Dai, was out catching rabbits at Ynys Geinon when he saw a small figure walking towards the 'castle'. As he watched he heard the little man speak a magical word, and as he did, a door opened into the rock. The little man went inside and the door closed behind him. The farmhand realised this man was one of the fae and was curious - he decided to try the same thing himself. He repeated the word he had heard and sure enough the door opened. He went inside and found himself in a wonderful faerie world full of gold, but he couldn't close the rock behind him as it weighed several tons and as the draught blew out their candles, this attracted the attention of the fae. The little man dashed towards him and spoke another word which caused the door to close and Dai was trapped inside.
But it turns out that the faeries were very welcoming and the farmhand lived with them as their guest for seven years. He learned a lot about his hosts, such as how they were fond of stealing milk and butter, and he learned of their passage-ways that ran under the mountains from Ynys Geinon rock, under Garn Goch to Dan-yr-Ogof in the north and to the caves of Ystradfellte in the east. 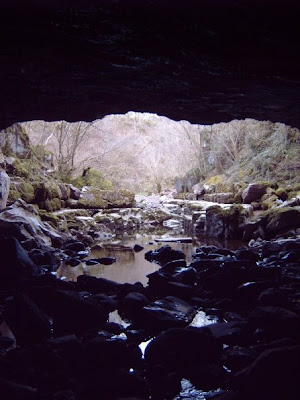 After seven years the farmhand went back to his master, taking with him a sack of gold which the faeries had given him. His master was surprised to see him and, I suspect, jealous of his new found wealth because he persuaded Dai to tell him the magic words. Then he went to the rock to try them for himself. The doorway opened and the master went in but he wasn't there long. He returned soon after with a bag of gold.
However the master was greedy and he couldn't resist going back for more gold. He made several visits to the rock, until one day when he never returned. It is said that Dai went to look for him and found his four quarters strung up behind the stone door. He was so frightened that he never spoke the magic words again and the secret died with him many years later.
The man whose words opened this blog insisted that the story was true, as the master had been known to become suddenly rich before, just as suddenly, vanishing forever. It's never wise to take advantage of the generosity of the fae.
Posted by Sue at 07:38

Wales is a country rich in faerie tales, many of which are rooted in the landscape. Realising this, it has become something of a hobby of mine (some would say an obsession) to seek out those places; a harder task than might be imagined as place names change with time and natural features are lost to industry, roads and cities. Often I find myself travelling back in time, as it were, to learn about traditional customs, ancient deities and saints, journeys which have given me a new perspective on the countryside around me along the way. It is these journeys i share with you here. So, welcome to my faerie trails and to my personal journey through the enchanted landscape of Wales.